skip to main | skip to sidebar

REVIEW FROM PULSE THE PREMIERE AT THE NORWEGIAN NATIONAL OPERA & BALLET, OCT 12th 2010.

"While the female dancer Aditi Mangaldas spins across the floor with sprightly grace, the male dancer Sudesh Adhana explodes through the space with angular and valiant execution. Adhana's performance resembles a forever intermission time bomb, yet at the same time soft on his feet and rapid as a cheetah — really quite gripping.

At a point we forget we are in a conventional theatre space in the Norwegian National Opera House and feel as if we were watching a quirky aerial artist at a circus in Delhi, a genius moment!" 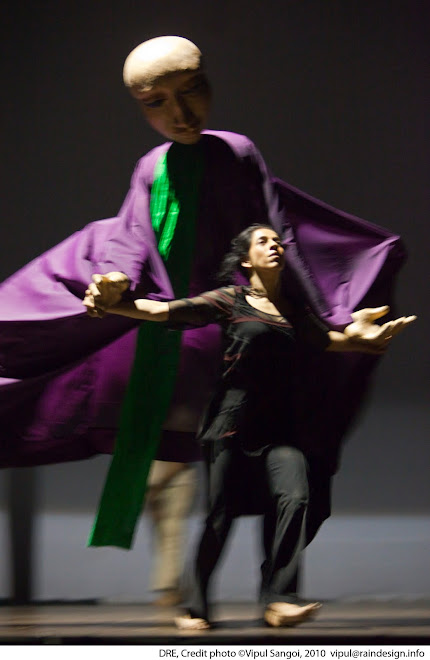 Damini House of Culture in collaboration with choreographer and dancer Sudesh Adhana (who lives and works in Oslo) and two high-profile dance- and puppet artists from India, is behind an innovative, contemporary production that opened ISHARA International Puppet Festival in New Delhi in January 2010. The show will have a two week residency and performance at the TOPIC, International Puppet Center of Tolosa in Spain on th 9th of October, before a Norwegian premiere on the 12th of October at The Norwegian National Opera & Ballet in Oslo.

For tickets link to The Norwegian National Opera & Ballet

For school performance send mail to damini@damini.org, or link to Damini House of Culture 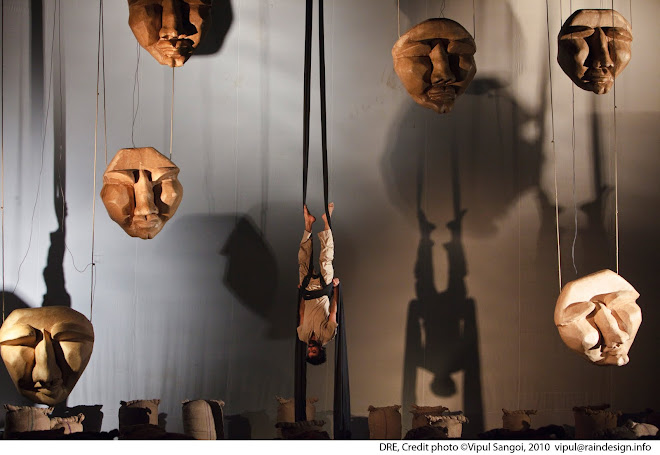 "This is a riveting contemporary dance and puppetry piece(...) extremely fluid in form and abstract sprite."

DRE: or three as they say in Pashto (one of the national languages of Afghanistan) is a performance with contemporary dance and puppetry that creates layered conversations about power, manipulation and war. Is the war ever truly over?

The artistic starting point for the performance DRE is based on an episode from one of the largest wars in the Indian Mythology, from the epic Mahabharata, and carried out in a parallel to today's war situation.

Episode from Mahabharata and the relevance of todays time

Gandhari is a woman in the Mahabharata, who marries a blind king. In order to be a good wife, she ties a blindfold in front of the eyes in sympathy for her husband. She is the mother of the 100 sons, who in the Great War are portrayed as villains, the evil. In the episode used as a source for DRE, we meet Gandhari who comes to the battlefield, where all her 100 sons are killed. The god Krishna, who is pulling the strings, who has consulted the victorious, arrives at the battlefield. Gandhari curses Krishna. In the general perception in India Gandhari is conceived as a woman of high moral standards, as she puts her husband ahead of herselves. But in today's India a number of authors and writers have questioned this. By choosing not to see, she may have missed the development and upbringing of their sons. Should she have seen and avoided the sons choices and mistakes?

Historically the figure Gandhari is from Kandahar, which is now the second largest city and capital of Kandahar province in Afghanistan. In a parallel to present time, we are dealing with a historical and mythical figure who could have been the mother of any terrorist.

The figure of the mythical Krishna is seen as a political reformer and the political key figure in the Mahabharata. The third figure in the performance of DRE is the protagonist of the war: the son, the husband, the soldier, the one who carries out orders, and or the fallen.

When the great war ends, a hundred Kauravas lie dead, blasted into the earth. Their mother Gandhari aches, a thousand arrows piercing through her soul. But what of Krishna, does he find solace, is this the victory he sought? Exploring the myth and exploding it through physical movement, dance and puppetry, Dre: Three creates many layered conversations about power, control, survival, death and life. Is the war ever truly over? 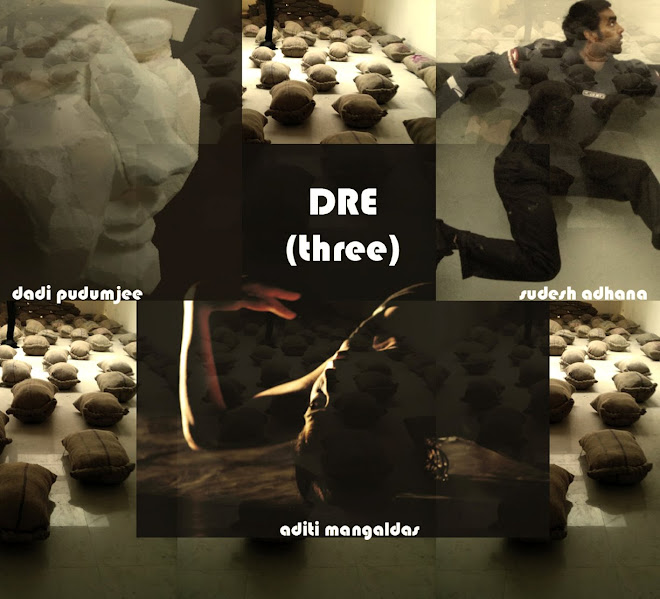 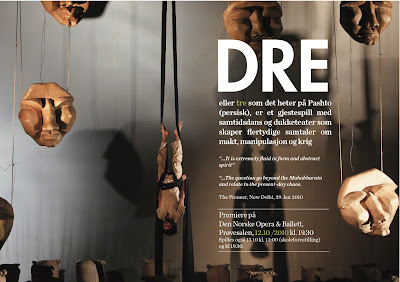 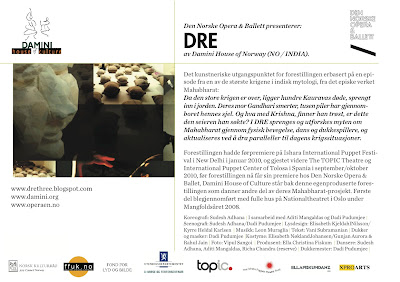 The whole team in Tolosa, Spain 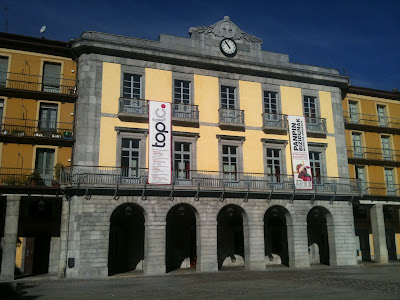 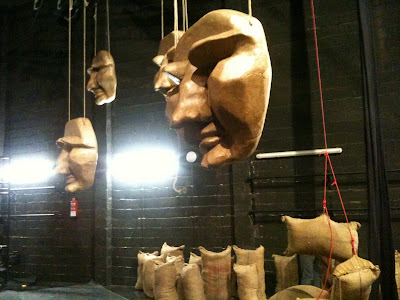 The whole team has arrived Spain, and we are working at the stage at the Topic Theater. It is located at Topic International Puppet Center, and it is a beautiful space in a beautiful city in the Basque Region, not far from Bilbao.

DRE will have its Oslo premiere at at The Norwegian National Opera & Ballet on October 12th and 13th, 2010. The performance will be a part of the guest program.

The TOPIC, International Puppet Center of Tolosa, Spain, has invited the production DRE for a two weeks Residency period prior to the Oslo premiere. The Residency will conclude with a performance at the TOPIC Theatre on the 9th of October. 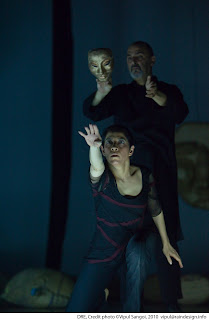 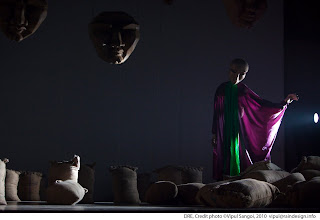 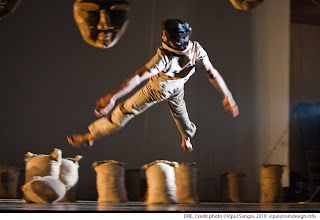 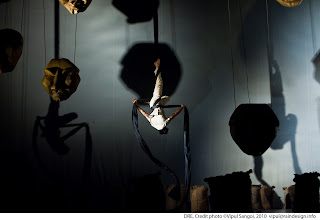 Posted by sudesh at 6:41 AM No comments:

Labels: from the preview 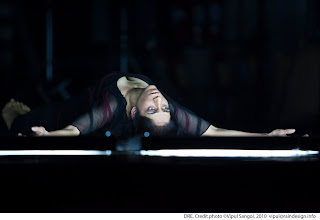 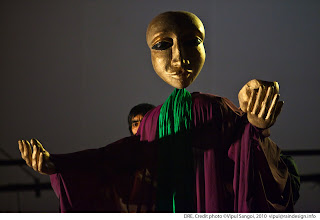 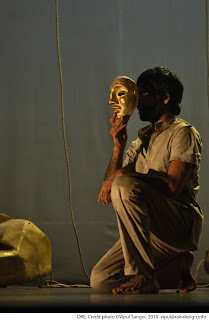 Posted by sudesh at 6:37 AM No comments: 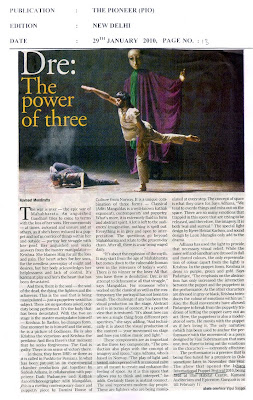 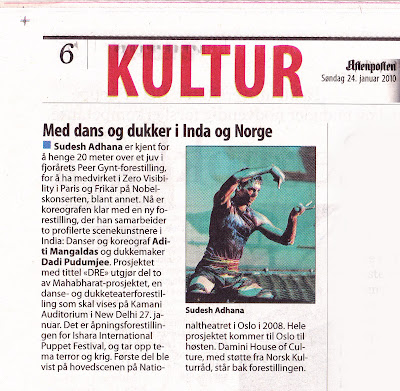 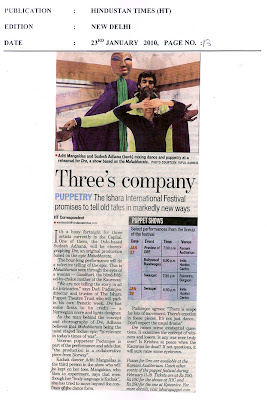 The production is getting noticed both in India and Norway. Prominent newspaper like Hindustan Times and Aftenposten has been writing
Posted by Producer EC at 3:17 AM No comments: 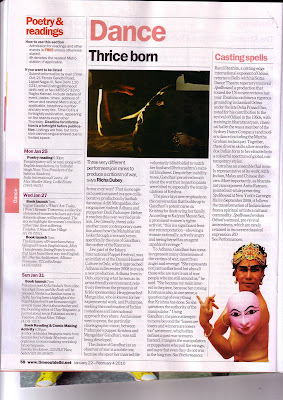 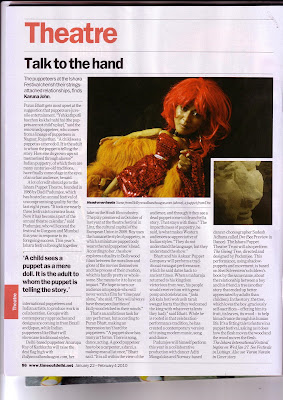 They are writing about the project and the festival in New Delhi
Posted by Producer EC at 5:31 AM No comments: 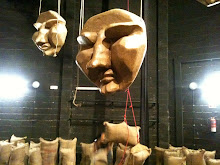 From the residency in Tolosa. Spain 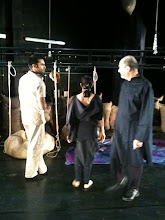 Link to the company, collaborators and artists

Richa Chandra of Damini House of Culture will be the understudy of Aditi Mangaldas, when the production will come to Norway, and she will perform the school performance at The Norwegian National Opera & Ballet in Oslo on the 13th of October at 1 PM. 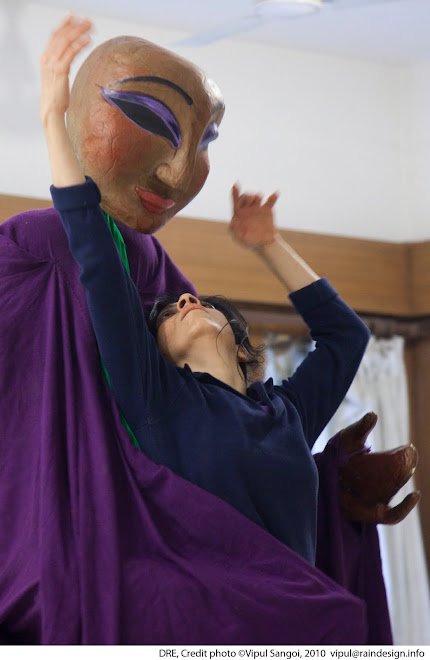 "DRE (three)" is a new contemporary dance and puppetry collaboration.

Kamani Auditorium in New Delhi, India on the 27th of January 2010.

The production is choreographed and danced by Sudesh Adhana, in collaboration with the highly profiled artists,

The production is part 2 of the Mahabharat project,

initiated by Richa Chandra for Damini House of Culture.